The Prostate Gland is in very close proximity to both the Bladder and the Rectum. Hence there is a strong possibility that either or both of these organs could be damaged by Radiotherapy (EBRT). In my case I suffered from “cystitis” in my Bladder during the treatment – a pain that grew as the number of fractions increased, but which disappeared within a few days of completion of the treatment – assisted by a prescription of Tamsulosin given to me after the last fraction.

However, I also developed a problem with my Rectum. It did not appear at the end of my fractions, but was in place “about 2 months” later. And this was a small blood loss from my back passage when I was passing stools. It was not a lot – my guess would be about 1/10th of a cubic centimetre per visit. Always bright red “fresh” blood and often just a 2 millimetre stripe on the stool. Occasionally – about 5 – 6 times in two years – there was a bigger amount. This only ever lasted for the one day only.

I consulted a Pharmacist to see if there was anything I could do to ameliorate the situation. I was told that if I could soften the stools the bleeding may go away, and I was advised to use a product that in the UK is called “DulcoSoft”. Please note that this is a “Stool softener”. My Oncologist subsequently approved of my using this product. But take care, true “laxatives” are NOT the same as this product and if you desire to take the same route you must discuss it with an expert.

I found that the lowest dose – 8ml per day – that I could measure was good enough to soften my stools. Occasionally putting it up a bit. You can find the best amount by experimentation.

Unfortunately it is in liquid form and I could not travel on aeroplanes with it. At these times I used Movicol – again a stool softener – sachets that are made up with water. I never managed to get a “stable” result with the Movicol. 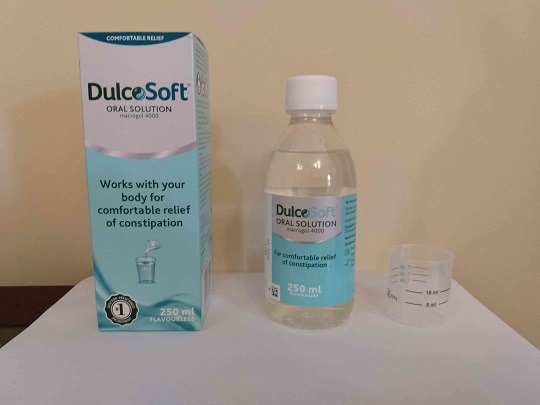 I mentioned this problem at my first Clinic in January 2019 but as it was not of any concern [to me] my Oncologist decided to leave it alone. I can’t remember discussing it at my second Clinic in July 2019, but at my third Clinic in January 2020 I raised it again. My Oncologist was happy with my continuing to use DulcoSoft but I “pressed” him to get it looked into. He did a DRE on the spot but could find nothing and so he recommended the Flexible Sigmoidoscopy that I have now had.

You can elect to have a degree of sedation for this procedure but the doctor performing it told me most patients are able to take the procedure without sedation and I opted for this. Although there is no pain involved it is an “odd” feeling that the procedure brings, which starts to annoy as time passes.

Unfortunately I am one of a limited number of patients who get a “Vasovagal Episode” and just when the probe was near the end of its run, I suddenly became very faint. I asked for it to be removed and there was about a 5 minute spell before I came back to normal.

This is a pity because they do the “major” part of the examination after reaching the top and as the probe is being removed. However, I could see the same screen as they watch and they had told me on its way up that my Bowel was in very good condition “with a bit of wear and tear”. I noted that it looked very clean, indeed.

But at this point they had seen no radiation damage at all. My feeling was that the radiation damage was at the very entry [from the outside world] of my Rectum and, as checking this would not endanger me to a second vasovagal episode they decided to have a look. Sure enough there was a small patch of damage in this area. I was able to look at it myself.

It was around 1 x 2 cm in size – perhaps slightly larger. It was a much darker pink than the main part of the bowel, and the blood vessels were on the surface as distinct from being covered by a layer of tissue. So naturally these vessels can easily be damaged and bleed slightly.

They would have been fixed “then and there” but this is not considered to be a good idea after the episode that I had, so there will be another appointment in the future to sort the problem out. I believe that this small area will be converted to “scar tissue” with no blood vessels at the surface.

I attended the department again on the 9th July 2021 to have this slight blood loss repaired. I believed that this was a “simple” procedure that would turn the damaged area into scar tissue and stop the bleeding.

However, there are downsides which I discussed with the Consultant who was to be carrying out the procedure.

Firstly the two blood vessels that have been identified are “tiny” and there is no possibility that this problem could ever result in a “flood” [of blood]. It will just carry on as it has done for almost 3 years, now. And, indeed, in time it may have limited scope to effect a repair of its own.

One risk is that disturbing this situation “can” result in increased bleeding – and this would require further surgery.

Further, the scar tissue that results from the process makes the rectum wall less elastic and this is often accompanied with an urgent feeling of needing a bathroom visit when it is not required. [I’ve since been told by someone who has the problem of having urgency when not required and he told me that my decision to avoid this side effect was a good one.]

At this point my feelings were that “irksome” as the problem is, if unlucky, I could exacerbate my problem by “disturbing” it.

The Consultant was very happy for me to decline to have the procedure and expressed the opinion that I had not wasted his time by getting this far. He also said that some men really do want to get rid of this sort of problem, and in those cases he would carry on and perform the procedure.

In summary my view was that there was “no risk” if I left things alone, but “some risk” if I went forward with the procedure. So I went with the “no risk” decision.