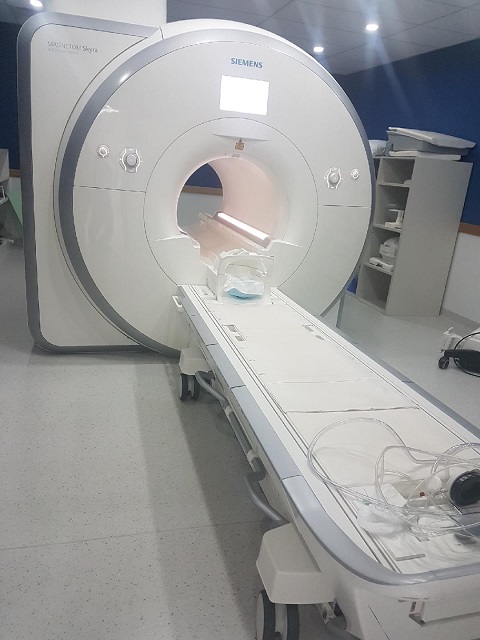 MRI stands for Magnetic Resonance Imaging and it is a technology that can map, in three dimensions, internal parts of the body. It should be noted that, unlike CT Imaging which uses X-rays, MRI is non-injurious to the body.

The particular form of MRI scanning that is used to detect cancer within the Prostate Gland is called Multiparametric MRI, or mpMRI.

The images from the mpMRI scan are mathematically analysed resulting in a “PIRADS score”. PIRADS is an acronym for Prostate Imaging Reporting And Data System. The score is between 1 and 5. Scores of 1 and 2 show very low grade cancer for which treatment is not performed, but the patient will be put under “Active Surveillance”. Scores of 4 and 5 indicate the presence of cancer which is advanced enough to go forward for a further test – by means of a biopsy. A score of 3 is “indeterminate” and may result in further surveillance or testing, depending on the complete picture that is known to date – albeit the patient will remain in the system.

At this point, if the patient has a score of 4 or 5, indicating cancer, this situation has been reached without any invasive testing taking place, and, indeed, for scores of 1 and 2 those patients will have had no invasive tests, and will be that way until mpMRI indicates that the cancer is potentially advancing.

What is a 3T mpMRI Scan? You will see this quoted often, and particularly by the PCRI.

The “3T” relates to the strength of the Magnetic Field in the Scanner. “T” stands for “Tesla” which is the unit in which magnetic fields are measured.

The Earth’s magnetic field varies over the surface of the Earth, but it generally lies between 30 microTeslas and 60 microTeslas. This makes the field strength in the mpMRI Scanner between 50,000 and 100,000 times larger than the Earth’s Magnetic Field. However, provided there are no magnetic “implants” in the patient and the patient wears only a Hospital Gown – no Watch, etc, it is completely safe and unlike a CT Scanner which depends on X-rays, there is no damage to the human body. These very large fields line up atomic particles within the body.

Earlier mpMRI Scanners were 1.5T mpMRI – half the power of the newer ones. This results in a partial loss of resolution in the image, but it will generally be good enough to obtain the desired results.

With PIRADS scores of 4 and 5 from the mpMRI Scan, a biopsy is now performed to establish the full nature of the cancer – particularly its aggressiveness.

This is a TARGETED biopsy. It is performed in a controlled way by overlaying the MRI scan image with a real time Ultrasound image, allowing the biopsy specimens to be taken from the cancerous areas in the prostate gland, and, if there is a leakage to the Seminal Vesicles, also from those areas.

Analysis of the biopsy yields a score, called the Gleason Score. It is in the range of 6 to 10.

The higher the number, the more aggressive the cancer is and for the most aggressive scores further tests are indicated – either or both of a PET/CT PSMA scan and a Bone Scan. The PET/CT PSMA scan is a relatively new type of scan that is not yet available in all centres. The reason for these extra tests is to establish if the cancer has expanded to other parts of the body, principally the Lymph Nodes and the Bones. This process is called “Metastatic Spread” and if present will affect the treatment of the disease.

There are two “classical” procedures for the Biopsy. They are called “Transperineal” and “Transrectal”. The second of these is used far more often than the first one as it is easier to perform. A device is inserted into the rectum and the prostate tissue samples are obtained by “firing” a needle through the rectum wall and into the prostate gland. Unfortunately, in a small number of cases – about 1 in 50 – material from the rectum mixes with the prostate tissue and can cause severe side effects, leading to the patient having to be treated in an Intensive Care Unit. Indeed, rarely, death can result.

However, if the patient chooses the Transperineal biopsy, the samples are taken through the Perineum, and this does not result in any dangerous transfer of tissue to the prostate gland.

You should discuss this with your Urologist. In my case, as this procedure came early on, and I did not have sufficient knowledge, my biopsy was by means of the Transrectal Procedure. However, fortunately I have had no negative symptoms from my biopsy.

Video – Description of the Gleason Score

This video describes the process